The Crooked Road is a celebrated year-round destination for traditional music lovers. Now we invite you to “come home” for our first-ever region-wide festival. Concerts celebrating old-time, bluegrass, gospel, traditional singing and dance, and many other styles will be presented in over 30 different communities where this musical heritage lives and breathes.

Formed in Bethesda, Maryland, in 1971, the Seldom Scene has recorded over 20 albums. Group founder Ben Eldridge—the last holdout from the original lineup of the Seldom Scene—retired in 2016, and was replaced by Christiansburg, Virginia-native multi-instrumentalist and singer Rickie Simpkins, who was formerly associated with the Tony Rice Unit and Emmylou Harris’ band. Other group members include Rickie’s brother Ronnie Simpkins, also an alumnus of the Tony Rice Unit, on bass and vocals, along with guitarist and lead vocalist Dudley Connell, once with the Johnson Mountain Boys, as well as dobro player and lead and harmony vocalist Fred Travers, and acclaimed vocalist and mandolinist Lou Reid, a onetime member of Ricky Skaggs’ band and of Doyle Lawson’s group Quicksilver. The Seldom Scene will be giving an outdoor concert in Christiansburg on June 18 on Main Street, so bring your own chairs. In the event of rain, the concert will be moved into the Baptist Church on Main Street. For more information, call 276 492-2409.

For more info regarding the event visit http://mtnsofmusic.com/homepage-home/2016-schedule/ 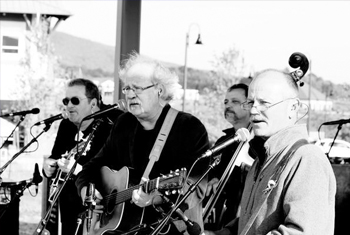