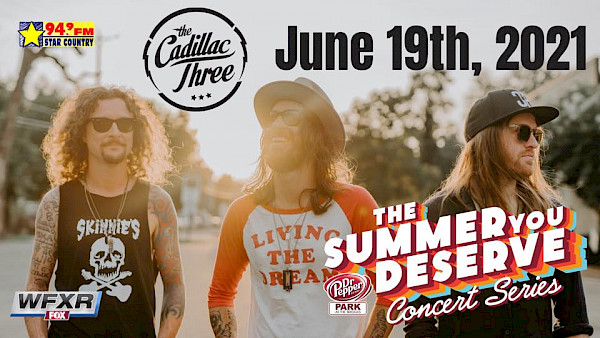 The Cadillac Three
When it comes to straddling the line between rowdy country music and rebellious hard rock, no one does it better than The Cadillac Three. Name another band that can play a country festival with Florida Georgia Line or Keith Urban one day and then jet off to the U.K. to share the stage with Metallica or Slayer the next.
On the Nashville trio’s long-awaited fourth album, they push their country, hard rock and southern rock bona fides to the limit while also introducing elements of funk and soul. The result is a dirty, greasy and hard-hitting sound that can only belong to The Cadillac Three — one they've christened COUNTRY FUZZ.
But COUNTRY FUZZ isn’t just the name of the group’s new album. It’s also their aesthetic, the phrase that best sums up both the music and lifestyle of singer-guitarist Jaren Johnston, drummer Neil Mason and lap-steel alchemist Kelby Ray, three guys who have become closer than brothers while growing up and playing in bands together in America’s most buzzed-about music city.
“We’ve been COUNTRY FUZZ forever,” says Jaren. “When I think of Southern rock, I think of Lynyrd Skynyrd. When I think of country, I think Garth Brooks. This record and this band are all of that. But it’s also ZZ Top and Jerry Reed. It’s Medeski Martin & Wood and Prince. There’s no better way to describe who we are than Country Fuzz.”
“It’s not easy to land on something that is your own thing, but we’re proud to say we did that,” Neil says of the band’s sound. “It works for us in any direction that we’re going. COUNTRY FUZZ is anything from a stripped-down country ballad to a sludgy, riff-heavy rock song. And it’s also country-funk.”