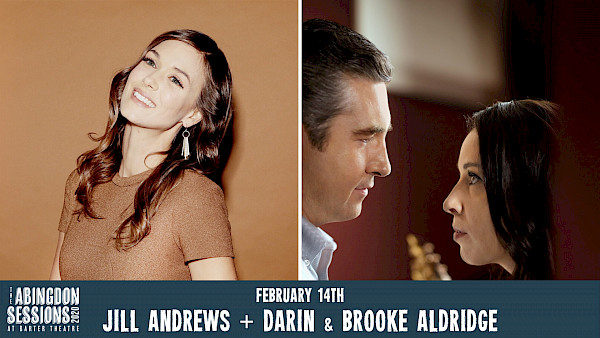 Jill Andrews Bio:
A native of East Tennessee, Jill Andrews kicked off her songwriting career as co-founder of the everybodyfields, a band whose mix of Southern genres – folk, country, bluegrass – and male-female vocals helped pave the way for future groups like The Civil Wars. It earned the everybodyfields a wide fan-base too, as well as appearances at Bonnaroo, The Kennedy Center, and a cross-country tour with The Avett Brothers. After three albums, Andrews left that band and launched a solo career, starting with a self-titled EP and a full-length record, The Mirror, that built something bigger a broader on top of her Americana roots. She followed The Mirror with the acclaimed The War Inside featuring a duet with Seth Avett.

While working on The War Inside, Andrews signed a publishing deal and began landing songs in multiple TV shows and movies, including Grey’s Anatomy, The Good Wife, Nashville, American Idol, Hart of Dixie, and Me, Him, Her (2015), among others, including the theme song to SyFy’s Wynonna Earp. One of her songs, “Joy Parade,” also appeared on The Music of Nashville: Season 2, Volume 2, a TV soundtrack that rose to number 13 on the Billboard 200.

Since releasing The War Inside, Andrews has remained busy touring and writing, opening shows for acts such as The Avett Brothers, Drew Holcomb & the Neighbors, Sean Watkins, and Mandolin Orange, as well as headlining her own shows throughout the country. Collaborations with friends like Langhorne Slim and Peter Groenwald have led to the digital release of a handful of duet singles and the release of Hush Kids, the eponymous and inaugural album by the band she founded with Groenwald. These songs feel present, and they’re delivered the way Andrews always delivers them: with raw emotion that is as real to her as it is to the listener.

Most recently, she has wrapped up recording on what will be her next album, singles from which are starting to be released and are available now. The album is due out in early 2020 and is the first effort co-produced by Andrews. It promises to be some of her most personal work to date.

Husband and wife duo Darin & Brooke Aldridge draw on the traditions of their native North Carolina, the savvy of a young, gifted band and their own dedication to ingenuity to create the most adventurous album of their career with their latest critically acclaimed release, Inner Journey.
The duo has placed several tracks at the top of the charts on Roots, SiriusXM, Bluegrass and Gospel charts. They have received multiple nominations from the International Bluegrass Music Association (IBMA) and Inspirational Country Music (ICM). Their music videos “Wildflower” and “Tennessee Flat Top Box” and most recently “Every Time You Leave” were heavily featured on outlets including CMT, CMT Edge, GAC, Bluegrass Ridge TV and The Bluegrass Situation. TV appearances include PBS, Great American Gospel, The Bluegrass Road, RFD-TV, Blue Highways TV, Songs of the Mountain, Woodsongs, Larry’s Country Diner and Music City Roots.
Both highly acclaimed vocalists in their own right (Brooke is the 3-time reigning IBMA Female Vocalist of the Year), Darin and Brooke combine rich harmonies with impeccable musicianship to create the unmistakable sound that has made them one of the hottest young acts in acoustic music and they’ve surrounded themselves with a band of equally amazing pickers. Darin spent 6 years as a member of the acclaimed County Gentleman and is a highly sought-after multi-instrumentalist. Brooke has been lauded for having one of the most powerful voices in music of any genre. Darin was named the IBMA’s Momentum Mentor of the Year in 2017 for his efforts at teaching and mentoring youth on guitar and mandolin and for giving unselfishly of his time and talents at public events at places like the Earl Scruggs Center in Shelby, NC

There’s a lot about the new generation of bluegrass that sure is inspiring. And Darin and Brooke are two of my favorites of this great new generation. I’m flattered that they included me in their new record and even better, to find out they are equally as great as people”.
~Vince Gill
“Brooke asserts herself as one of the more powerful female vocalists on the scene…”
~Relix Magazine
“Husband and wife duo Darin & Brooke Aldridge have carved out one of the fastest rising careers on the acoustic music scene today.”
~Billboard Magazine