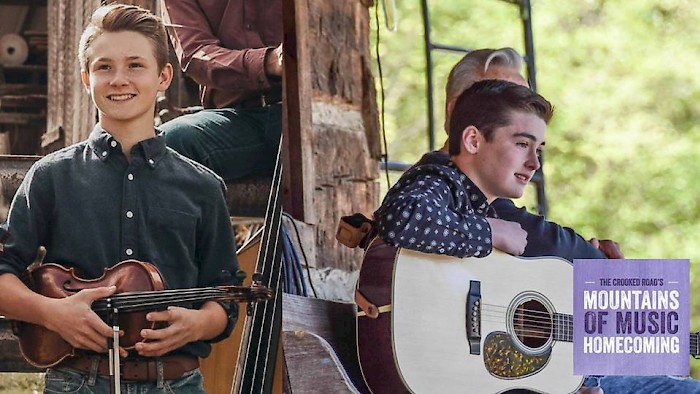 Carson Peters is a 15-year-old wunderkind—a nationally recognized bluegrass and gospel fiddler and singer who has been entertaining audiences for a dozen years. He began playing the fiddle at 3 years of age when his parents bought him a 1/8 size fiddle. In recent years, Peters has regularly performed publicly in and near his home in the Tri Cities area, including at such prestigious venues and events as Mountains of Music Homecoming, Song of the Mountains, the Carter Family Fold, the Bristol Rhythm and Roots Reunion, Dollywood’s Barbeque and Bluegrass Festival, Asheville’s Bluegrass First Class, and WDVX’s World Class Bluegrass.

Presley Barker is a phenomenal young guitarist who lives in Wilkes County, North Carolina, which was also home to one of Barker’s guitar heroes, Doc Watson. First learning to play the guitar at the age of 7, Barker won the Galax Old Fiddler’s Convention guitar contest in the adult division when he was 10; over the next couple of years he won the West Virginia State Flatpicking Guitar competition and the Wayne Henderson Guitar competition.