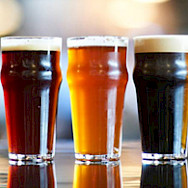 The Carlsberg Group ( /ˈkɑrlzbərɡ/; Danish: [kʰɑːˀlsb̥æɐ̯ˀ]) is a Danish brewing company founded in 1847 by J. C. Jacobsen after the name of his son Carl. The headquarters are in Copenhagen, Denmark. The company's main brand is Carlsberg Beer, but it also brews Tuborg as well as local beers. After merging with the brewery assets of Norwegian conglomerate Orkla ASA in January 2001, Carlsberg became the 5th largest brewery group in the world. It is the leading beer seller in Russia with about 40 percent market share. In 2009 Carlsberg is the 4th largest brewery group in the world employing around 45,000 people.