From the Virginia Beer Wholesalers Association 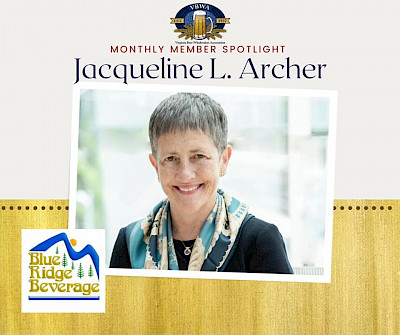 This month’s #teamspotlight is Jackie Archer of Blue Ridge Beverage Company, Inc. which is headquartered in the Roanoke Valley. Jackie is President and Chief Operating Officer and a Director of the company, where she has held multiple positions for her family’s business since 1997.

Jackie’s first career was in mergers and acquisitions and corporate finance in Chicago after graduating with an engineering degree from Princeton University and an MBA from The University of Chicago Booth School of Business.

Blue Ridge Beverage is a full-service wholesaler which distributes beer, cider, wine, and non-alcohol beverages throughout Southwest and Central Virginia from four operations located in Salem, Waynesboro, Lynchburg, and Abingdon.

Jackie chairs the Board of Directors of the Virginia Beer Wholesalers Association, having contributed untold hours serving in various roles over the years. She is currently one of ten distributor executives serving on the Constellation Brands Beer Division National Distributor Council and previously served on the Molson Coors National Distributor Council. Jackie also serves on several non-profit, foundation and corporate boards in her community, including the Virginia Tech Foundation, the Taubman Museum of Art, RGC Resources, Inc., and the Roanoke College Community Advisory Group.

What Jackie loves most about the beer business is the camaraderie of the people she has met and with whom she has worked, whether in her company, the VBWA, supplier and retail partners, and other affiliated stakeholders.