WHEREAS, the Blue Ridge Beverage Company has been under the direct ownership of the Archer family since 1959, when James M. Archer, Jr., and his wife, Regine, moved their family to the Roanoke Valley; and

WHEREAS, Regine Archer became president of Blue Ridge Beverage in 1972 after the sudden death of her husband, beginning her successful leadership of the company in what was then a traditionally male-dominated industry; and

WHEREAS, Regine Archer, who currently serves as chair, and her six children—Nancy A. Doucette, Bob Archer, Jim Archer, Paul Archer, Evelyn A. Hunt, and Jackie Archer—are all actively involved in the company; and

WHEREAS, under the leadership of the Archer family, Blue Ridge Beverage is a leader in the industry, employing approximately 435 individuals and servicing more than 4,000 retail customers over a 49-county, 17-city territory with more than 200 brands of beer, hundreds of fine wines from across the globe, and non-alcoholic beverages; and

WHEREAS, in 2005, Regine Archer was inducted into the Junior Achievement of Southwest Virginia Business Hall of Fame; in 2006, she was named a Miller Legend by SABMiller for her four-decade commitment to Miller Brewing Company and to the beer industry in general; and in 2013, she was conferred an honorary Doctor of Commerce degree by Roanoke College; and

WHEREAS, Bob Archer has been involved with the Lewis-Gale Medical Center, Virginia Chamber of Commerce, Virginia Tech Foundation, Virginia Center for Healthy Communities, Military Family Support Center, and Virginia Veterans Services Foundation; he was also elected to the board of directors of the Virginia War Memorial Foundation in 2015; and

WHEREAS, both Regine Archer and Bob Archer are recipients of the National Beer Wholesalers Association’s highest honor and award, the Life Service Award; and

WHEREAS, Blue Ridge Beverage and the Archer family have a longstanding commitment to charitable activities and philanthropy and support numerous charities, including Roanoke’s Bradley Free Clinic, Center in the Square Cultural Center, Taubman Museum of Art, Jefferson Center, and Opera Roanoke; and

WHEREAS, Blue Ridge Beverage also takes significant interest in promoting education and funds academic and research programs, scholarships, athletics, and capital programs at Virginia Polytechnic Institute and State University, the University of Virginia, James Madison University, and Roanoke College, as well as other academic institutions; now, therefore, be it

RESOLVED by the House of Delegates, That the Archer family hereby be commended for its business success and its commitment to the community and the Commonwealth; and, be it 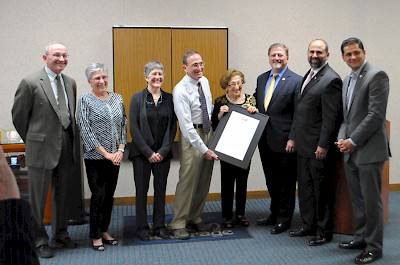 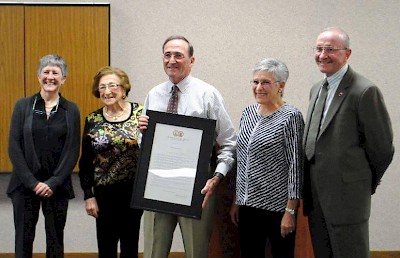 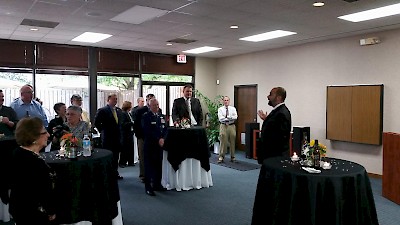 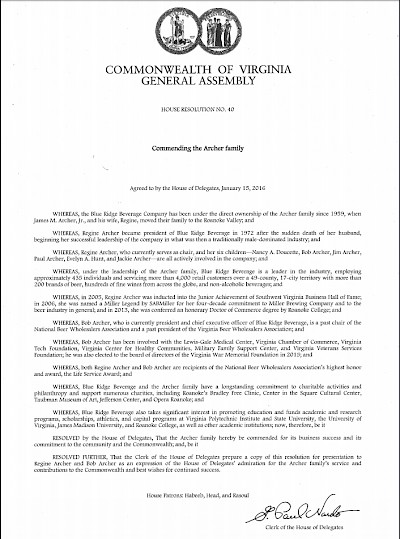