The award was presented at the annual MillerCoors Distributor Convention in San Diego. The Bill Coors Quality Award honors the distributor in the MillerCoors national distribution system who excels against the company’s exacting quality measures.  The award is named in honor of Bill Coors, the trailblazing engineer who spearheaded numerous brewing innovations and is known to this day for his dedication to brewing quality.

“In the words of Bill Coors, quality never stops and that’s why we say that quality is a partnership between brewer and distributor at MillerCoors,” said Fernando Palacios, chief supply chain officer for MillerCoors. “Blue Ridge Beverage’s Lynchburg division achieved the highest score possible in all MillerCoors quality measures earning a total portfolio score of 100% and a focus brands score of 100%. Blue Ridge’s Waynesboro division achieved the same perfect scores and took the top honor in 2012. In fact, all five of the distributor’s operations demonstrated their commitment to quality by achieving five of the top ten quality scores among all MillerCoors distributors in 2012 and 2013. 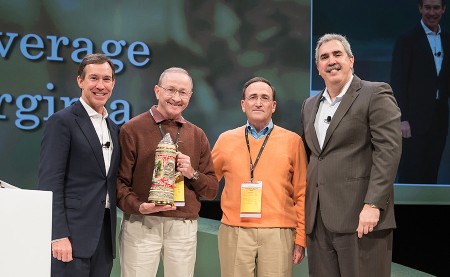 Blue Ridge Beverage was founded in 1938 and has been owned and operated by the Archer family since 1959. Blue Ridge Beverage is one of the largest, full-service wholesale beverage distributors in Virginia. Headquartered in Salem, Virginia, the company distributes beer, wine, cider and non-alcoholic beverages throughout a 49-county, 17-city region with facilities located in Salem, Waynesboro, Lynchburg, South Boston and Abingdon, VA. Blue Ridge Beverage and its 400 employees service more than 4,000 retail customers including supermarkets, convenience stores and restaurants. The company’s objective is to provide the most efficient and sophisticated full-service beverage distribution model for beverage suppliers to achieve and sustain their brand objectives in central and southwest Virginia. Blue Ridge Beverage is proud to represent many of the finest beverage suppliers from the United States and around the world. MillerCoors LLC is Blue Ridge Beverage’s largest supplier.

MillerCoors brews, markets and sells the MillerCoors portfolio of brands in the U.S. and Puerto Rico.  Built on a foundation of great beer brands and nearly 300 years of brewing heritage, MillerCoors continues the commitment of its founders to brew the highest quality beers.  MillerCoors is the second-largest beer company in America, capturing nearly 30 percent of the U.S. beer sales.  Led by two of the best-selling beers in the industry, Coors Light and Miller Lite, MillerCoors has a broad portfolio of highly complementary brands across every major industry segment.  The company offers a variety of leading craft and import brands, including Blue Moon and Leinenkugel’s through its Tenth and Blake division.  MillerCoors operates eight major breweries in the U.S., as well as the Leinenkugel’s craft brewery in Chippewa Falls, WI and two microbreweries , the 10thStreet Brewery in Milwaukee and the Blue Moon Brewing Company at Coors Field in Denver.  MillerCoors insists on building its brands the right way through brewing quality, responsible marketing and environmental and community impact.  MillerCoors is a joint venture of SABMiller plc and Molson Coors Brewing Company.  Learn more at MillerCoors.com, at facebook.com/MillerCoors or on Twitter through @MillerCoors.